Interested in the WYLER ZEROMATIC? Request a FREE quote today. 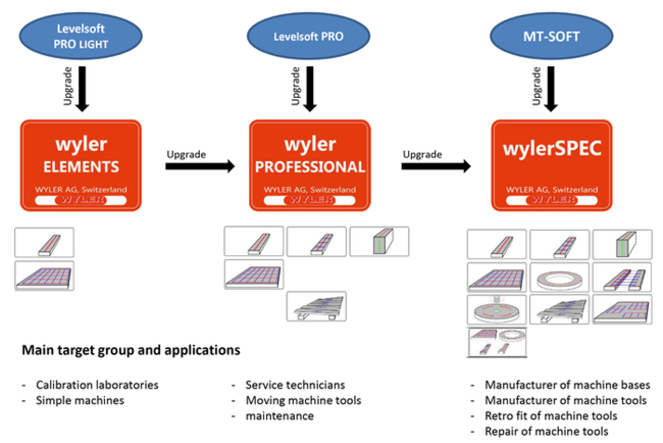 The software to measure the geometry of objects and machines such as straightness of guideways, flatness of surfaces including both granite tables as well as machine tables and parallelism of guideways

GENERAL
The software wylerSPEC is the ideal tool to measuring tasks related to the geometry of objects and machines such as straightness of guideways, flatness of surfaces including both granite tables as well as machine tables, parallelism of guideways, squareness of vertical machine elements compared to horizontal parts.

The software wylerSPEC software stands out through:
- User friendliness
- Straightforward interpretation of results
- Adaptability to your measuring tasks
- Modular design
- Efficient – time can be saved thanks to simultaneous measurements of multiple variances
- Integration of laser interferometers and autocollimators

The wylerSPEC software replaces our LEVELSOFT PRO and MT-SOFT software packages. Thanks to its user-friendliness and informative display of readings, it is even easier to set up, calibrate, and measure machines. Universal: wylerSPEC makes it possible to input measurement readings not only from WYLER inclination measuring instruments tools, but also from laser interferometers and autocollimators.

Measurement of flatness with BlueLEVEL-2D and wylerSPEC – save up to fifty percent of time!

The wylerSPEC software makes it possible to utilize the full functionality of the BlueLEVEL-2D: The measurement values along the X and Y axes are read out simultaneously. It is thus possible to reduce the time spent on the measurement of a setting and measuring plate by up to 50%

​See more Details and Specifications by Downloading the Flyer Here

​LICENSE KEY FOR SOFTWARE
After the testing period the user has to buy a valid license in order to continue using it. He then receives a hardware Dongle. The Dongle provides the option to install the same software on several computers and to move the Dongle to the PC on which the software is used.​